I’m on a blogging break, so I’m featuring some guest bloggers! They will be sharing their stories and experiences with chronic disease, and I’m excited to share them.

Today, we have Carole, who blogs at www.navigatingthestorms.com . Not only is Carole a fantastic writer and advocate, but she is a kind soul who is a great support in the chronic illness community. 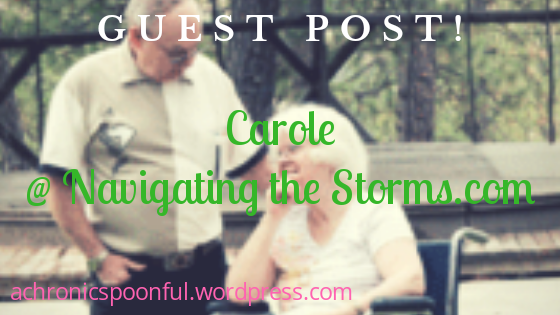 A glorious day to have our lunch break outdoors. Imagine my surprise to feel stinging on my shoulder. Since I was wearing a wide-necked peasant blouse, and we were sitting under an olive tree in the courtyard, I presumed a bee got me. But, repeatedly? Thus began my forty year journey with invisible disabilities.

My husband, Joe, and I had only been married 12 years. We had two young sons.  Joe was working on his masters at seminary, so he could be a pastor and army reserve chaplain.  I was working in the library.

Over the next few days, the stinging turned into severe back pain. The doctor put me on complete bed rest and heavy doses of Tylenol and aspirin. I had torn “every muscle on the right side of my back from my waist to upper back.” It took a year to return to 95% of pre-injury normal.

The medical community could not understand the reason for the injury, although they knew my job caused it. Just one of those things, they said! Oh, no—the exact same injury reoccurred one year later. Even though I stopped the activity sooner and followed the same treatment, I only recovered by about 50%.

We and Joe graduated at the end of the second year, we moved to northeast Washington where he began his career. Our sons graduated high school there and went on to college. They are both professional men with families of their own. Sometimes, I wonder if the hardships of growing up with a mom with serious limitations actually strengthened them.

Several years after Joe’s graduation, I was diagnosed with post-polio syndrome (PPS) (1). It sounded a reasonable diagnosis and explanation as I had had polio (from which I “fully” recovered) at age two. Doctors disagreed on the diagnosis of PPS. One specialist even said I didn’t have it, as he didn’t believe there was any such thing! Anyway, the symptoms never completely fit although it did explain the fatigability. It never quite explained why my back spasmed so easily. As the weakness and fatigability increased, my life became more limited. And my family had to take up the slack. Friends helped us at times.

Seventeen more years passed before we found the next piece of the puzzle: cervical and writer’s dystonia (2). Over the years, my right hand developed odd movements and became more difficult to control. My neck and shoulders got tight, causing pain at times. The doctor began Botox injections in my neck and shoulders, which gave me great relief. Botox, which paralyzes muscles, is only temporary and must be repeated every three months. Yuk! We left the hand alone since it wasn’t that bad. The medication we tried didn’t work.

Another four years passed, and Sjogren’s (3) entered my life. It usually only causes dryness issues, but once it goes beyond those glands it can hit anywhere in the body. Of course, it triggered other neurological problems! It also caused Raynaud’s (4) and gastroparesis (5).

Somewhere along the line, dysphagia (6) and breathing muscle problems evolved. Polio slightly weakened the breathing muscles, but the lungs remain unaffected. Either polio, dystonia, or Sjogren’s causes the dysphagia.

A few years ago, the neurologist added the diagnosis of generalized dystonia, which means the dystonia is genetic. That answered the question about all the unusual, but not serious, oddities I experienced as far back as young childhood. I consider myself very blessed because most children born with generalized dystonia have a very severe form.

Diagnosis of each of these conditions is difficult.  There are no objective tests (like X rays or MRIs) available.

2 Dystonia: a disorder causing muscles to contract and spasm involuntarily. Individuals affected by dystonia cannot control or predict the movement of their bodies. Symptoms of dystonia do not appear the same in every patient. Dystonia may affect a specific part of the body or many parts simultaneously. Dystonia Foundation. https://www.dystonia-foundation.org/

3 Sjogren’s syndrome: systemic autoimmune disease primarily presenting with dryness of mouth, eyes, and skin. It can cause profound fatigue. It can affect any organ in the body. It often occurs with rheumatoid arthritis, lupus, or scleroderma. It increases the risk of lymphoma. Symptoms can be mild or debilitating; they can remain steady, worsen, or occasionally get better. Sjogren’s Syndrome Foundation. https://www.sjogrens.org/home/about-sjogrens

4 Raynaud’s: a vascular disease causing cold toes and fingers due to spasms of blood vessels. It also rarely affects lips, nose, or ears.

5 Gastroparesis involves weakness of the muscles of the stomach, or the nerves controlling those muscles. It causes mild to severe digestive problems. Also called slow stomach.

6 Dysphagia: difficulty or discomfort in swallowing, as mild as feeling a lump in throat or as serious as the inability to swallow. Aspirating food is possible. Neurological disorders, including stroke, are a common cause.

Carole Griffitts has lived with invisible disabilities for forty years. She and her husband/caregiver live in northeast Washington state. They love nature, and she uses her scooter to sometimes accompany him on his hikes. She uses her laptop, called Expanded World, to connect with others.

Her website, for and about people living with invisible disabilities, is www.navigatingthestorms.com.